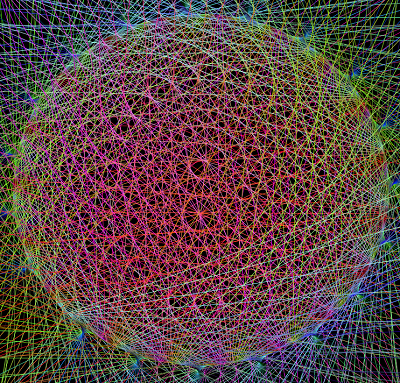 Asymmetric key ciphers employ non-reversible functions that rely on modular arithmetic . The RSA encryption is based on this formula:
for x the number to be encrypted, for the two elements of the public key e and n, y the encryption of x is calculated as follows: y = xe mod n. To decrypt y, with d the private key, the forumla is applied: z = yd mod n … as if by magic, z is equal to x. We really have here an asymmetric entryption because the encryption key (here e and n) is different from the decryption key (here d and n). Of course this can only work if the numbers have properties between them: from p and q two secret primes, we get n = p x q (part of the public key) and f = (p-1)x(q-1). The we choose e (part of the public key) as first with f and compute d (private key) as the inverse of e mod f (e x d = 1 mod f).

why: we constructs with the modulo operation the set of classes of the quotient group of (Z,+) by its subgroup pZ generated by an integer p, denoted Z/pZ : its elements are the integers not divisible by p, considered modulo p, two elements being considered equivalent when their difference is a multipule of p. When p is a prime number, Z/pZ this time provided with multiplication (and deprived of zero), is a group (law of internal composition, associativity, neutral element, symmetry).

We see in this example of prime encryption numbers, magic numbers by excellence (because no formula allows to calculate the nth of them), have provided by their fundamental properties of amazing applications using the function modulo.

This figure, animated in a web page using Javascript, which was inspired to me by Mickaël Launay in his YouTube video “The hidden side of the multiplication tables – Micmaths” illustrate these astonishing properties revealing by the drawing the mathematical aesthetics that is hidden in certain numbers (prime numbers, π, euler’s number, golden number, etc …). Here the modulo operation is the key to reveal the “internal” construction laws numbers, and to show the strange harmony that makes it the heart.

Click here to display the animation the psychedelic modulo

important note: this javascript script consumes a lot of CPU resources (drawing tens of thousands of lines on the screen). Of all tested browsers, only Google Chrome was able to display the animation fuildy. It seems to effectively use hardware acceleration.

Use Google Translate for free on the command line
Zoom the UI with WPF
Trace the WPF easing functions
Installing applications using Microsoft ClickOnce technology
Transform the separators of a CSV file
First steps with ANTLR4 in C #
WPF: Developing an inflector of resource dictionary keys

The constituent elements of this site, images, texts, source codes and documents are the property of the site author and are protected by applicable law regarding copyright law, trademark law, right of designs and unfair competition (unless explicitly stated otherwise)